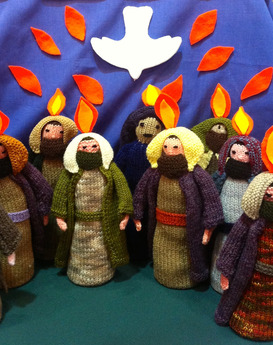 The Kingdom of Heaven was much more available than when only the High Priest could enter it, but SOMETHING needed to be done to get the Kingdom of God out among all the people of the earth.

Then God did something SO AWESOME…

Acts 2:1-4 And when the day of Pentecost was fully come, they were all with one accord in one place.
2 And suddenly there came a sound from heaven as of a rushing mighty wind, and it filled all the house where they were sitting.
3 And there appeared unto them cloven tongues like as of fire, and it sat upon each of them.
4 And they were all filled with the Holy Ghost, and began to speak with other tongues, as the Spirit gave them utterance.

Did they really speak different languages?

Acts 2:6-8 Now when this was noised abroad, the multitude came together, and were confounded, because that every man heard them speak in his own language.
7 And they were all amazed and marvelled, saying one to another, Behold, are not all these which speak Galilaeans?
8 And how hear we every man in our own tongue, wherein we were born?

Then there is a list of some seventeen (17) different languages…

Acts 2:12 And they were all amazed, and were in doubt,
saying one to another, What meaneth this?

In the chapter before this account (Acts 1), Jesus explained that this would happen.  He also explained WHY…

Acts 1:3-5, 8 To whom also he (Jesus) shewed himself alive after his passion by many infallible proofs, being seen of them forty days, and speaking of the things pertaining to the kingdom of God:
4 And, being assembled together with them, commanded them that they should not depart from Jerusalem, but wait for the promise of the Father, which, saith he, ye have heard of me.
5 For John truly baptized with water; but ye shall be baptized with the Holy Ghost not many days hence.

8 But ye shall receive power, after that the Holy Ghost is come upon you: and ye shall be witnesses unto me both in Jerusalem, and in all Judaea, and in Samaria, and unto the uttermost part of the earth.

The work of the Kingdom of God was now going out to the whole earth!!

Matthew 24:14 And this gospel of the kingdom shall be preached in all the world for a witness unto all nations; and then shall the end come.

Mark 16:15-18 And he said unto them, Go ye into all the world, and preach the gospel to every creature.
16 He that believeth and is baptized shall be saved; but he that believeth not shall be damned.
17 And these signs shall follow them that believe; In my name shall they cast out devils; they shall speak with new tongues;
18 They shall take up serpents; and if they drink any deadly thing, it shall not hurt them; they shall lay hands on the sick, and they shall recover.

Where is the Kingdom of Heaven?

The government tries to stop it.

The unbelievers spend time and money to make it “illegal”.

Jesus has sent His servants out into every highway and by-way to share the good news of His Kingdom!

Consider the situation in the USA;

The majority of citizens are raised and taught through the Public Schools.

-They were taught that there is no God.

-The whole idea of Christianity was mocked and ridiculed.

-So-called “Christians” were blamed for all of society’s wrongs.

-Teachers are told they cannot speak of Jesus.

-Preachers are told they cannot talk of politics.

A Harris Poll (December, 2013) finds that a strong majority (74 percent) of U.S. adults say they believe in God.

--68 percent believe that Jesus is God or the Son of God;

--65 percent believes in the resurrection of Jesus Christ;

--64 percent believe in the survival of the soul after death;

--58 percent believe in the devil and hell.

There are some 17 “mainline” churches and dozens of small “missions”.  Nearly every school has a christian ministry using part of their campus for religious services.

Where I am employed, nearly every morning a handful of us Christians gather to pray for God’s grace to turn hearts to Christ and to offer ourselves to Him for His service.  We are not many, but here we are.

My wife and I have a helps ministry and we are able to provide (without charge) repairs to HVAC, electrical systems and appliances (after my regular employment).  I share the Gospel wherever I am…

-generous donations are used to help the poor here in Arizona and in
several places in Mexico.

-I am fluent in Spanish and we have helped several immigrants
become American Citizens.

-many people that were not serving the Lord are now
seeking Him and attending and supporting local churches.

-many have been healed miraculously or delivered from
addictions, depressions or demonic problems.

We are one family in one small community out in a desert.

There are hundreds of us in this community.

How many cities and towns are in this State?

How many in the United States?

How many in the ENTIRE WORLD?

Since Pentecost, Jesus has spread His Kingdom throughout the world!!


If you have not seen the Kingdom, there are powerful reasons why you haven’t.  The next message will explain why you can’t and how you CAN.

(To continue this message, please read;